This is the first new monster I did for D&D 4E, so let me know what you think and leave a comment. While the rest of this blog is in German (mostly), I’ll keep all „Points of Light“ D&D articles in English, mostly because D&D 4E is not available in German anymore, so German D&D 4E players are forced to use English material anyway. New articles for my own campaign and world setting „Blut & Eisen“ (Blood & Iron, a fantasy setting with some steam thrown in) will continue to be in German, though. The monster pix you’ll see (and see here) I made myself, some (most) of them are actually sketches, some even final artwork for the „Monster Manual“ of the best Science Fiction Roleplaying Game there is, Battlelords of the Twenty-Third Century. So if you ever tire of the „same old, same old“ dungeon crawl and want to trade your magic sword for a neat pulse cannon or tactical nuke, there you’ll find carnage the likes you’ve never experienced before. And look: Battlelords elves have 14 fingers and wear kilts!

GHOUL FLESHHUNTERS ARE THE HUNTING DOGS of an abyssal ghoul or any other higher undead creature. They are singleminded and bestial, caring for nothing more than hunting the living and sinking their hook-like hands into their flesh, dragging them screaming to their undead masters. 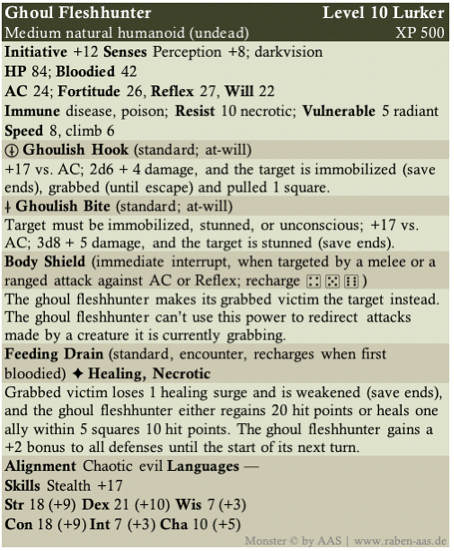 A character knows the following information about ghoul fleshhunters with a successful Religion check (in addition to what they may know about ghouls in general (> Monster Manual)).

DC 25: Ghoul fleshunters are undead creatures in service to abyssal ghouls or Doresain, the King of Ghouls, himself. They often travel in hunting packs, trying to catch the living and bring them to their ghoul master(s).

DC 30: Ghoul fleshhunters are abyssal in nature. However, unlike those graced with special power by Doresain, fleshhunters are cursed with a bestial nature, binding them forever to their betters. Powerful they may be and dangerous as well, but they are nothing better than slaves or hunting dogs for Doresain’s court.