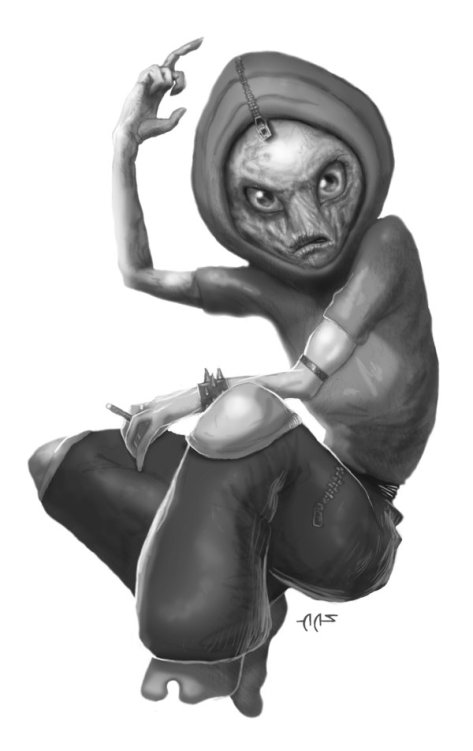 Generation Z will be the name and general theme for my hemobrew “Cyberpunk NOW” RPG. While I am working on it (in the background), I’ll sometimes write or quote articles as “teasers” for the game. And because they catch my general feelings for this our world and the GeneZ game perfectly …

This little gem I found is less „Generation Z“ but more how I feel in general. I am a child of the 80ies. Which is why I still feel the difference between saying your mind versus political correctness, doing unhealthy stuff and enjoying it versus feeling ashamed of missing a lesson in the fitness center (or „spa“) and actually meeting with friends versus breaking a relationship via SMS.

The Children of the 80s by various, found [here]

We are children of the 80s.

The 80s … it was a time when all we sang were Michael Jackson’s Beat It and Billy Jean and We Are The World was the best song in the universe. Lionel Richie’s Dancing on the Ceiling was the coolest MTV, and we didn’t understand all the fuss about Madonna’s iron tits. Cyndi Lauper and Boy George were the weirdest looking people around. Tiffany was every boy’s dream girl and Tommy Page was the guy every girl wanted to marry, until New Kids on the Block. London Boys‘ dance routines were the best, and Johnny Hates Jazz’s I Don’t Want To Be A Hero was the song we swore by.

Freddie Mercury wasn’t a singer in Queen but Flash Gordon himself. Battlestar Galactica and V were how we visualised the future, and we watched them because they looked great though we didn’t understand the storylines. We watched the Love Boat cause all the adults were watching it although we didn’t find it funny. The shiny black talking car in Knight Rider was the car we wanted to own when we grew up and the helicopter in Airwolf couldn’t be destroyed except for a hole the size of a bullet. The Last Starfighter and Back to the Future were our favourite movies and the flimsy Tron plastic cups they gave away at Burger King were our most prized possession. We thought that Ultraman was cool though we could see the zippers on the back of the monsters. King Kong was the scariest movie we saw. Missing Sesame Street and The Electric Company was a mortal sin and we would shout at the top of our voices when the Count started counting his bats or when Big Bird started singing the alphabet. We blushed and became uncomfortable at any kiss on the TV screen. John Travolta was King on Saturday Night Fever and we knew every line in our played-to-death Grease cassette tapes. All we remember of Superman was that he could fly.

Boys‘ favourite cartoons were Mask and GI Joe and if we did not own at least a dozen of the action figures, we were incomplete persons (and our parents were evil). Our imaginations were limitless: headquarters was a cave under the dining table and the kitchen sink was the enemy’s hideout. We memorized by heart all the verses in Visionaries and knew which robots belonged to the Autobots and which belonged to the Deceptacons, not to mention knowing the names of ALL the robots in Transformers. Smurfette was the ideal girl. We were amazed by the Rubic’s Cube and prided ourselves in being able to do one side. Anyone who could complete it was god. Well, we still are amazed.

Girls‘ favourites were Strawberry Shortcake and Smurfs. The Carebear Countdown was their inspiration and they knew what sort of colours and stuff would fly out of their bellies when they stood in a row. Gargamel was like a particular uncle they knew. They aspired to become Barbie when they grew up, to live a big pink houses, own plastic furniture, and thought that Ken was the hunkiest guy around. Teddy bears promised that they would stay with us forever and never run away.

(For the death of us boys, we would never admit that we watch ‚girlie‘ cartoons as well).

The 80s was a time when books were read and reread to death. We’ve all loved Enid Blyton’s books. We felt angry when Elizabeth (The Naughtiest Girl in School) was wrongly accused of something she didn’t do, and we would sit in the toilet lost in The Faraway Tree and the Wishing Chair, together with Moonface and the Saucepan Man, for hours on end until mum demanded we come out. We prided ourselves in having read all the books printed on the back of the bright blue hard covers and to our parents‘ dismay, we had to own every single one of them. We all wished we were Charlie and wondered what the Oompa Loompas would feel like when we bashed them up. And we could not, for our lives, understand why the adults read books with no pictures in them.

Sleeping over at a friend’s place was the event of the month. A cup of milk and a plate of chocolate chip cookies were a complete meal and a proper diet. A box of crayons and plain sheets of white paper were enough to build vast empires. Hunting for spiders (and anything else that moved) in the bushes was adventure in its own right. Your friend’s friend was your friend, your friend’s enemy was your enemy, your enemy’s friend was your enemy, and your enemy’s enemy was your friend. We couldn’t understand why our older brothers were so crazy over fast cars and other girls, and why our older sisters wore perfume and make-up.

The 80s. A time when friendships were made in the morning, broken in the afternoon, and remade in the evening. A time when having the same interests and hobbies qualified you as a friend. A time when most of our toys didn’t have to have electricity running through them to keep us amused. If anything was wrong in the 80s, we cared not for we lived for that day, and that day only.

But most importantly for us 80s children, it was a magical era; where the world seemed to hang in a suspended state of transition … a time when the people we met and the friends we made are the ones who will stay with us till kingdom comes.

Afternote: Sometimes, I take out my old photographs to relive those memories and always, for just a flash of nostalgia, I wonder: was the world I remembered bathed in the yellow tinge of dirty sunlight? Then I will carefully replace those photographs, smiling and thankful. There is no other era that I would liked to have lived in.

Hi, my name is Taehoon Kim. I came by your site accidentally but maybe more than just an accident. I was born in ’82 in Korea but I went to live in New York (Whitestone/Queens) when I was 3. What you talked about reminded me a lot of when I was little (GI Joes, Carebears… you forgot „My Little Pony“). Nothing ever seemed so bad as it does now… was it worse then? What do you remember about then? Even through all the hard times I put up with the world never seemed so bad as it does now. It’s like the air we breathe in the city… was clean but now it’s filled with car exhaust and the thing is you never notice it because it happens slowly and quietly.

I live in Korea now… we buy things we don’t need, make things that have no use. Everyone’s with the fashion.

Where do we go from here?

To me, the saddest thing about being a child of the 80’s is that no one thought about how the hell we were to survive the 90’s, much less the tools we would need to exist beyond that point…

Excuse me if I sound as if I am whining, but I truly feel I was robbed… robbed by a decade of „me, me, me“, driving people to work, work, work and worry about those around them at a much later time.

I am 18 years old… and throughout the entirety of my highschool career, I was accused of having warped from the 80’s in some sort of time machine. Although it has caused me some ridicule, I still fight, to this day, to bring the full vibe of the 80’s generation into 2000 and beyond. Also, I’d just like to say that a true robbery is having lived through most of the 80’s and been to young to remember. And so I continue… proudly… caring my carebears lunchbox around… adding more band pins and patches to my favorite jacket… honoring all punk and vintage rock… and stating firmly to all who ask… I was born too late.